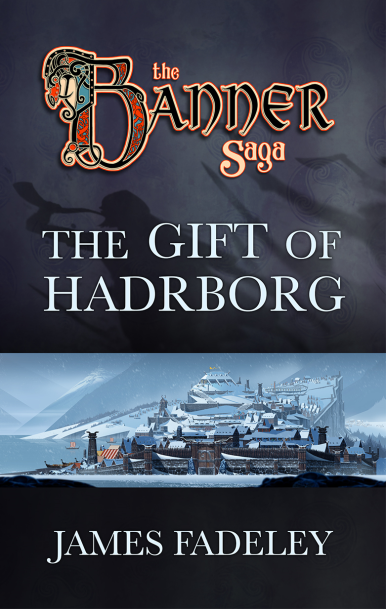 The big day has arrived. The Gift of Hadrborg is finally available for eBooks on Amazon.

Based on the best selling game from Stoic Studio and published by the hardworking folks over at Versus Evil, the novel is a prequel tale that takes place before the events of the first Banner Saga. The story follows the efforts of Eirik, an undercover agent in service to the Governor, as he sabotages the gang-epidemic across the crime-riddled city of Strand. However his successes only stop the lowest tier of thugs and lowlifes, treating the symptoms but never the cause as the most organized elements manage from afar. But when a trio of strangers arrive followed by a known felon, Eirik is embroiled in an all-encompassing conspiracy that threatens to topple the city itself.

Packed with political intrigue, action, a pulsing plot and complex characters, The Gift of Hadrborg is an great starting point for uninitiated fantasy readers as well as an awesome supplement for fans of the games.

And if you happen to be heading to PAX East this year in Boston, be sure to checkout the panel for The Banner Saga 2 which will host game directors Arnie Jorgensen, John Watson, Drew McGee, Matt Rhoades and composer Austin Wintory. I’ll be signing physical copies on Saturday at the Versus Evil Photobooth before and after the panel—if you don’t download a copy for the flight to Boston, be sure to get the book for the return home!

Available now for eBooks on Amazon. Print edition coming soon. For more information be sure to follow Stoic Studio and Versus Evil on Twitter.

Today marks the launch of the Banner Saga: Warbands Kickstarter! Based on the hit game created by Stoic Studio, the board game continues combining tactical skirmishes with long term resource management to survive. And the even more incredible news is that, within about 30 minutes, the KickStarter has already been entirely funded.

Of interest to readers out there is that my first novel, The Gift of Hadrborg, is an add-on available to anyone who joins the funding. Inspired by The Banner Saga: Factions, the story takes place before the events of the first game and tells the tale of Eirik and the woes of a city suffering from crime and strife.

In the troubled city of Strand, the City Watch and Governor’s Guard struggle to fend off the criminal empires who rule their streets. Between the corruption, smuggling, underground slaving, mass larceny and a rebellious group attempting to usurp the throne, Guardsman Eirik’s life shows no signs of getting any easier.

Yet the arrival of group seeking a stolen artifact heralds a coming disaster for the already rotten city. Uncertain if he can trust his own people, Eirik has little choice but to throw in his lot with two enigmatic varl and a country boy. Toss in a conman seeking vengeance and a slave-turned-bodyguard with an elusive agenda, and Eirik has his work cut out for him.

But even if his questionable allies and the hordes of eager thugs don’t kill him, the plot they discover threatens to rip Strand apart. And may destroy the fragile varl-human alliance that maintains the peace with their giant neighbors in the north…

The Gift of Hadrborg is an action-packed prequel novel to Stoic Studio’s critically acclaimed The Banner Saga Part 1, which was funded through Kickstarter to wild success.

A viking-fantasy meets crime thriller, The Gift of Hadrborg will help satiate story-lovers whether or not they’re salivating for the next installment of The Banner Saga series! But no matter what, check out the KickStarter. Whether you love great games or stories (or both), Stoic Studio, VS Evil and Megacon Games have got you covered!

Software engineer, writer, gamer and recently a father, James Fadeley keeps himself busy with fresh stories and thoughts on the industry.