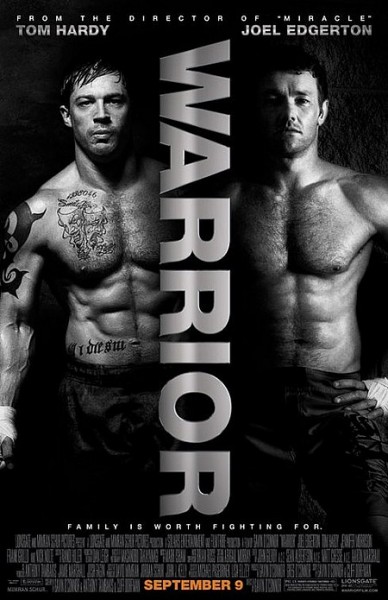 Thanks to Gofobo.com, I got my hands on advanced movie screening tickets for Warrior, which doesn’t come out for another two weeks. I didn’t know much about it other than the fact that it involved two brothers and a Mixed Martial Arts (MMA) fighting tournament. I didn’t realize it at the time, but I was in for a treat.

Paddy Conlon (Nick Nolte) is a former Marine and former alcoholic, now sober and sorry for past abuses towards his two sons and wife. One day after church, Paddy’s youngest son and wrestling prodigy Tommy (Tom Hardy) returns out of the blue to have a father-son chat. Meanwhile, Paddy’s eldest son Brendan (Joel Edgerton) struggles to make ends meet while working as a high school physics teacher. Brendan and his wife Tess (Jennifer Morrison) work three jobs between them and are still dangerously behind on their mortgage.

When Brendan moonlights as a prize fighter for extra cash, he is swiftly terminated from his teaching position despite the best attempts of principal  Joe Zito (portrayed by the always likeable Kevin Dunn) to prevent it. Tommy takes up training again at a local gym where he floors a local contender for an upcoming Sparta tournament and impresses the gym owner. But when both Brendan and Tommy learn about the tournament however, anyone can see their fateful collision course.

The movie mixes two genres strangely but fairly well, being both a sports martial arts movie and a family drama. Many modern martial arts movies do this to some degree, such as the Rocky series or Cinderella Man starring Russell Crowe and Renée Zellweger, but always between husband and wife. It certainly shares a strong kinship with The Fighter starring Mark Wahlberg and Christian Bale, both movies being family dramas on top of prize fighting.  But the fighting in Warrior is simply a byproduct of the strife and struggles the characters face. This fight of brother against brother was probably going to happen sooner or later, while the themes of this film were not as discrete as they were in The Fighter.

The directing deserves a respectable nod for its careful application of blue lighting and the right mix of sports event cinematography to regular camerawork within the story. The plot throws in plenty of twists and turns as details surrounding the characters’ pasts are revealed. There are no bad guys in this movie, and you don’t know just who to cheer for as you reach the end.

Still I have to strike a few points for two things. First, the lack of blood and bruises. This was probably a conscious decision to keep the PG-13 rating and relax people who do not like on screen gore. Maybe a director’s cut version will solve this, but the beatings these guys took seemed less intense without massive post-fight shiners. The second was the application of a few over emotional factors, like the ending music and the military chorus. Gavin O’Connor, who makes a cameo appearance within the movie as tournament founder J.J. Riley, was banking on some patriotic military appeal. Which is fine if it were a touch more subtle. I also wonder if O’Connor was playing with the idea of an alternate ending, and is in fact doing these screenings to gauge audience reactions to the decide on which to use for Warrior‘s release.

But the acting in this movie is outstanding. All of the actors, both major and minor, manage to subtly blend this chemistry on screen, letting you easily pick up the friendships and the rivalries. Everyone is on point, mixing the smiles and rib poking with checked frustration and unfinished business. Praise is due to Jennifer Morrison for overcoming the stereotypical worried wife that we’ve seen with Zellweger or Talia Shire, who played Rocky’s Adrian. Instead of the hysterics and tears, Morrison puts on a performance of pouted-lip resignation when she sees she cannot change her husband’s mind. But this blossoms into amusing antics, such as spending the entire day watching her cell phone for news and pretending not to be worried.

Nick Nolte’s character is pitiful to watch: humbled before God and trying to make amends, however unwelcome, with his two sons. Although infinitely patient with his angry children, his rambling character manages to jerk sympathy where none is likely deserved. It’s perhaps unfair to judge him because we only see the echoes of who he was and the results of his actions. Joel Edgerton successfully combines both brains and brawn with his character’s esoteric background, indirectly luring his students into cheering for him as the guy they all want to be.

Hardy's character is not so much shown to the world as he is 'unleashed.'

But the real spot light is on Tom Hardy, who is phenomenal. Hardy has completely replaced the charming Eames of Inception with Tommy Conlon. The loveable accent is gone and in its place is something from the rougher side of New Jersey. Instead of charming wit, we have Tommy’s checked fury which creates an atmospheric tension so thick, it chokes you.  But never does it get out of control. It just broods in a menacing hulk of a man but never explodes outside the ring. To be put in the same room as this man would probably terrify you, if only quietly. And best of all, Hardy proves beyond the shadow of a doubt that Christopher Nolan‘s decision to cast him as Bane in the upcoming film The Dark Knight Rises was no mistake. Tom Hardy could easily be an action movie star as huge as Arnold Schwarzenegger or Sylvester Stallone, but also fully capable of acting and portraying a deep role. His pairing with Christian Bale will be legendary.

Warrior is a solid flick with appeal enough for everyone. Check it out, if only to pump yourself up for next summer.