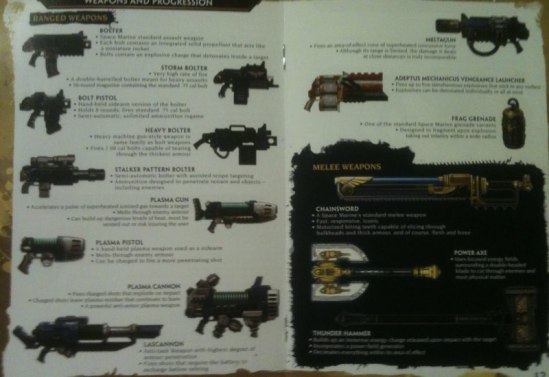 So many weapons, so little time...

In response to an earlier misunderstanding about weapons available in my post SPESS MEHREN, here is a scanned picture of the weapons that will be available from a posting on the Space Marine forums.

As you can see, all grades of bolter and plasma weapons will be available, including the plasma cannon. The las-cannon will also be here, as will frag grenades and the meltagun, as well as some kind of grenade launcher, which is unusual for the Astartes. Melee weapons include the chainsword, power axe and thunder hammer, with the powersword being a special purchase. The flamer, missile launcher, autocannon and power fist are not on this list.

Moving along, here’s something else cool.

It sure as heck looks like it’s from Space Marine graphically, but I can’t help but notice it looks like the picture of Pedro Kantor and the Word Bearer from the 4th edition game rulebook. That and the power fist looks a touch unusual. Hence, I believe it’s fan made. But it’s certainly awesome one way or the other.