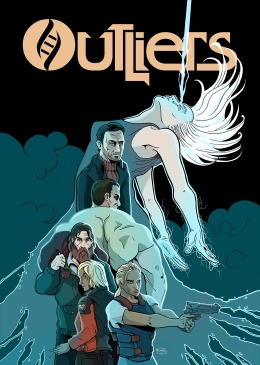 Director Zimmerman won’t admit it of course, but the projections are bad news in all directions. Outliers, men and women of extraordinary talents, are exploding in numbers across the globe thanks to the new drug “Illumination.”

We think the clandestine group “Legion” is responsible for spreading the substance, but not for producing it. And they’re not the only ones on the move, as others are playing in the shadows. AURA has begun operating in other countries, and our network is growing to match that of the CIA. But I can’t shake my gut feeling that we’re making a mistake, that we’re spread too thin to see what’s really coming.

The future is a jigsaw puzzle that we try to rearrange into something pleasing, but the image it’s taking is horrible…

Outliers: 2016 is now available in eBook format for the United States and the United Kingdom. The print version will be available next week, but until then be sure to follow us on Facebook or Twitter for more news!

I finally have this thing called “spare time” again. Not much, but some. So much of last week was spent formatting and preparing Outliers for release. The eBook version maybe complete, but the print version isn’t just yet.

What little spare time I’ve had has gone into preparing the Halloween costume, playing Bloodborne (tis the season of beast-hunting) or catching up on television. We finished Luke Cage and Downton Abbey very recently, so we’re are currently catching up on Orphan Black which we left off after the first season.

I really have to give Tatiana Maslany credit for going above and beyond with the demands of her many, many roles in Orphan Black. Toni Collette had a similar position with the United States of Tara, which was set against the backdrop of being a dramedy, but whatever comic elements are found in OB are strictly an occasional byproduct of its genre as a sci-fi drama. Maslany does a fine job of truly wearing the many, many masks of her characters, from accent to history, body language to quirks to truly create unum de multis (the opposite of e pluribus unum).

Well, back to work…

Note: I was just informed that there is a blog by the name of “The Televisionary.” I did not know this during my cheeky title creation, but out of respect, I have changed the name of this post.

My backlog of unfinished television continues to grow.

At the moment, I’m still half way through the latest seasons of both Game of Thrones and Penny Dreadful. I don’t think I’ve watched a single episode for almost two months now. The last seven episodes of Mad Men also goes untouched. I’m still waiting on Netflix releases for the sixth season of The League and the second season of The 100 although I really want to read the books too. I’m currently surfing through the fourth season of The Wire. And despite interest, I’ve yet to really go past the first season of Orphan Black.

You know, I don’t think I’ve ever mentioned Orphan Black before. The barely science fiction show focuses on a bunch of clones who have grown up separately from one another, but discover each other and conspire to evade the organization that created them. Clones are one of those “forgotten” tropes of science fiction that the showrunners have picked up, dusted off and made fresh again.

Tatiana Maslany who plays main clone Sarah Manning and the rest of her “sisters” does an absolutely stellar job of wearing characters in a diverse manner. She never gets old, never slips and never fails to convince the audience that despite having the same face, these are all different people. It’s a remarkable performance from just one actress.

Nor am I inclined to get a break from the onslaught of watchable television anytime soon. Marvel’s Jessica Jones is due out sometime this year. And most exciting of all has to be the fact that Jon Bernthal has joined the cast of the second season of Daredevil as one of my favorite characters. Frank Castle, better known as the Punisher.

Three times, three times various studios have tried and failed to execute a movie starring the famed vigilante. Once in 1989 with Dolph Lundgren, again with some success in 2004 with Thomas Jane, and the last in 2008 with Ray Stevenson. Inexplicably, no one could seem to nail the formula down for one of the few major characters in Marvel’s franchise that doesn’t even have any superpowers. No powered armor, no gamma radiation transformations, no healing powers. Just a former marine with the connections, patience and iron will to walk the walk with the worst criminal elements of the underworld.

Perhaps Castle’s biggest attraction is that while every other characters in Marvel’s line up covers the cheeky and fun, the light and morally sunny, the Punisher sticks to his grimdark corner. His unyielding, stark ethos and calm acceptance of killing constantly putting him at odds with almost every other character. It’s against Castle that every hero’s ethics are measured.

One thing that may have made Frank Castle so hard to portray on the screen is his age. His best representation was in Garth Ennis’ PunisherMAX prints, which stayed true to the source material and kept Castle as a Vietnam veteran. While other Marvel heroes have found ways to retool and restructure their origins from more recent conflicts, to do so with Frank would risk leaving some of his best and most inspired stories behind because of their connection to that desperate war.

Perhaps they’ll try having Nick Fury provide Castle with the Infinity Formula, which prolongs life and solves this issue. While PunisherMAX segregated Castle to his own backyard and away from the greater community, it did establish and maintain a working relationship between the two men. Even in Ennis’ work, there is a premise for the possibility.

To my knowledge, Ennis’ work has yet to be referenced in the current MCU. But when Ennis left the Punisher to work on a new series, Jason Aaron picked up the pen to write a continuation. The first of Aaron’s PunisherMAX collections crafted an origin story for the Kingpin, which seemed a strong inspiration for Vincent D’Onofrio’s character in Daredevil’s first season. If the PunisherMAX prints are influencing their work, Marvel undoubtedly faces the incredibly difficult choice of whether to tap Ennis’ amazing stories for Daredevil… or save such tales for later, should the Punisher’s popularity finally prove enough to merit his own series.