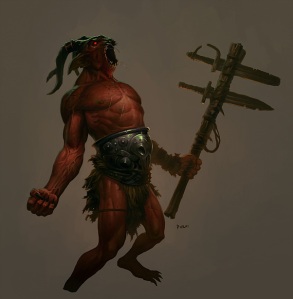 Just a minor update for those casual Blizzard fans like myself, as opposed to the hard core ones who already know. The Diablo III website has recently gotten a revamp and is now integrated with Battle.net services. Still no word about the release date, but beta testing is underway. Given Blizzard’s long QA times and the Starcraft expansion, it could still be a long while.

While Warcraft lost me a long while back and Starcraft is entertaining but not something I want to play more than occasionally, Diablo remains my favorite of the Blizzard line up. I have heard rumours of a Diablo MMORPG in the works, but they’re nothing but hearsay.

I have heard that Blizzard is implementing some sort of pay-for-items plan similar to Team Fortress 2 and has partnered with PayPal for that reason.

Although I was initially skeptical of the cartoony graphics, I’m looking forward to it.

So a day ago, Narravitium and I were chatting about the works of Aaron Dembski-Bowden. I mentioned that his book titles Soul Hunter and Blood Reaver made me wonder if they were influenced by the Legacy of Kain game series. Oh no, of course the Night Lords legion aren’t vampires, but they damn well feel like them sometimes.

Still, it’s a stretch of the imagination. But the plus side is that I remembered some damn fine music for writing. So I raided my old game collections to find some ideas. Time for a nostalgic trek.