How can a man survive that cold with such a thin mustache?

The Old World is an easier setting for people to get into than its 40k counterpart. For one, it’s more jovial and humourous. It feels like there is a light at the end of the tunnel. It’s more fun and less serious. Second, thanks to gentlemen like the father of swords and sorcery, Robert E. Howard and high fantasy writer J.R.R. Tolkien, a lot of people get fantasy settings long before they touch the pages of a new novel. The concepts of Orcs and magic have long had a place in our minds.

The double edge of this sword is that some people are tired of fantasy as there is plenty of bad writing in the genre. And others have a distinctive taste for it, which may easily reject the details of ye olde Warhammer.

But the Blackhearts Omnibus isn’t like most fantasy. Never mind complex details like magic or the history of Altdorf. Forget needing to learn a whole bunch about the universe. You don’t have too. It’s an easy read about ordinary guys in extraordinaire situations.

Nathan Long‘s tale stars luckless trickster Reiner Hetzau. Although far from innocent, Hetzau is imprisoned on false charges and is spared for a secret mission with a group of other criminals. Eventually earning the leadership of the group, the Blackhearts face against the Chaos marauders of the north, treacherous Imperial commanders, rat men and plenty more.

Nathan Long excels at two things; characters and plots. The plots throw enough at you to keep you guessing, as the Blackhearts face traitors within their own ranks. They are convicts, after all. Meanwhile, a combination of political intrigue and unforeseen elements keep shaking up the story. There maybe times you wonder if the plot has gotten off track, right before it comes sailing right back at you. And then explodes. 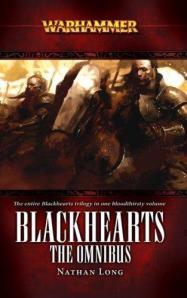 Another version of the cover.

With the Old World setting established for him, Long focused on creating a group of smirk-jerking characters who remind you of an adult version of The Goonies. What’s more, you cannot help but feel that there is some similarity between Reiner Hetzau and one Captain Jack Sparrow of the Pirates of the Caribbean fame. It kind of helps that the book feels like it was made for the movies too, with many of the character’s backgrounds told through dialogue over the writer’s narrative.

But in that statement lies the single real weakness with the omnibus. The story is written surrounding Hetzau. Even though it’s always in third person, the narration never leaves Hetzau’s side. If you happen to like him and his roguish ways, you’ll probably end up loving this book. If not, then this isn’t the book for you.

But the Blackhearts Omnibus is an enjoyable, leisurely read for even the uninitiated. Try a chapter. You’ll probably like it more than not. If not love it.

Yes, Halloween is a month and a half away. Guess what? I don’t care.

Fact is, I love Halloween. Dressing up, being goofy, funny and scary. There is no finer way to celebrate the autumn season than with the clash of colors and fun I get from a great Halloween night. This year however, Halloween falls on a Monday, so it’s effectively going to be a four day celebration. People will dress up on Friday right through to Monday. For me, that means I can do up to four costume ideas. The ol’ gear box in my head is cranking and thinking up of a few ideas.

In the mean time, I’ve taken to rereading some tales from the Old World, including Mathias Thulmann, Witch Hunter trilogy by C.L. Werner and the Blackhearts Omnibus by Nathan Long. The Warhammer Fantasy universe is far more Halloween-esque than its 40k counterpart. Why? I guess it’s because it’s less science focused and more mythical, and the colors I often see of it include more browns and oranges. The monsters tend to be more traditionally scary, like the undead, skaven and orcs. If I recall from the Witch Hunter trilogy opening, C.L. Werner is a huge Halloween fan. And something about it shows through his work. I’ll be posting reviews of these omnibuses soon enough.

Captain America? Batman? Or… would I dare go as Thulmann himself? Warhammer fans might know me, but other people would be lost. Unless of course, I could tie the idea into this oldie genius skit from Saturday Night Live. Or, this guy:

What could possibly go right?