So I’m actually stockpiling a few blog posts for later. One of the things I’m trying to do with my Horoscope here is actually maintain a consistent flow of posts and updates. I’m not the only one who does this of course. News papers actually write a draft of famous celebrities and movie stars that they update, waiting for the day that the celebrities dies to fill in the details and post. I however, will not be measuring people up for their coffin. Just filling out some reviews and guides for later.

Because I’ve finished Nemesis and am working on The Girl with the Dragon Tattoo, my book reviews are probably going to be some more classic readings from the Warhammer universes. As in, stuff that I’ve already read. This way new fans can find the must reads, the what’s fun to read and what they should probably avoid. One of the most important things for Warhammer fans is going to be finding what’s considered “normal” within the universe. 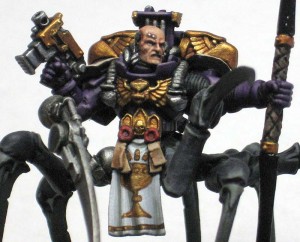 I enjoy the Soul Drinkers, but the oddity of their tales will just confuse anyone fresh to 40k.

Take the Soul Drinkers for instance. It’s interesting and highly unusual even for the Warhammer 40,000 universe. You get interested fans as well as divisive haters because the Soul Drinkers just don’t readily fit into the scheme of things. While this is fine for anyone who has an existing knowledge of the universe, for newbies it’s going to confuse them silly.

I’ve also started some sketch ideas for my second short story submission. After this window, I’m going to write a few things for other, regular online magazines in order to shake up my routine a bit and give me a bit of freedom.

Good times. Also, if you’re looking for a good tune, check this one by Within Temptation.