It was so rewarding yesterday, and again this morning, to use the 40 pound weights. I have never performed a bicep curl with one and to do so now is an indication of how much my body has grown since I was a pale skeleton back in high school. What can I say? Ding!

Also, found a nice compilation of music for body building.

Alright, so onto the thought of the day: Escape from New York meets Fallout. Hilarity and a great game ensue. Yeah, some say it was kind of done with The Pitt expansion. But that’s not enough for me, and I’ll explain some of my different ideas in a moment.

If you’ve never seen Kurt Russell as Snake Plissken, then I just don’t have anything to say. But the fact is that Snake Plissken not only defined what was awesome in the 80s, he became an inspiration for another character who goes by the name of Snake.

What kind of story would it have? Let’s say that the countries of Europe have managed to contact the Enclave or N.C.R. and are trying to set up a meeting. But the current president has been kidnapped and has access to technology that they were expecting to help them rebuild. Taking a line from Van Buren, they turn to the Prisoner to assist them. They throw in the bomb collar, but the prisoner can find a way to get rid of it on island to prolong his stay. And life.

So what exactly would I do to set it apart? Well, aside from the amazing hardcore mode in Fallout: New Vegas, I would add:

I could dig it. Problem is it needs to be bigger and badder than anything before. I mean huge. I might throw in additional ideas. Or maybe I’ll try to come up with a mod of my own so people can play my vision. I might even do away with the idea of ‘safe houses’ to get people to focus on survival instead of hoarding. Hoarding is fun but the survival aspect was one of the reasons I like the frustrating Dead Money add on. You take what you need and move on.

I’ll think about it some. 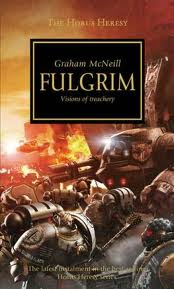 Not enough coffee for witty remarks just yet.

I’m not going to lie. I was a little adverse to reading this book for a short while. Let’s just say it’s an American thing many of us picked up in the 80s and 90s, when our heroes weren’t supposed to be beautiful. Guys like Bruce Willis and Kurt Russell played these bad ass roles where their characters were injured and made unattractive in the course of their conflict.

Oddly, if this book had come to me about 10 years ago and I had been into Warhammer 40k back then, I would have been all over it. In the past I was more into Japanese animation with heroes so gorgeous, the line between masculine and feminine disappears. I’m long over my pretty boy phase.

Another thing to discuss came up when I was talking to a friend. Also a Warhammer fan, he asked me what the real danger of Slaanesh was. The problems of Nurgle and Khorne were obvious, the threat of Tzeentch was more subtle but still there.

What is the threat Slaanesh really imposes? It’s a problem every parent faces for their pubescent teenage children. There is the threat of STDs and pregnancy. Obsessions too are an aspect, like a relationship where one side is far more possessive than what is reasonable. And then there are those whose limitations are so small, it’s dangerous. Like David Carradine.

And not just sex, since he is the lord of excess. It’s an issue when someone drinks themselves to death on alcohol, or eats their way to a heart attack. And I think anyone who has met a serious artist has seen some antics that worry them, such as the artist not eating or sleeping to finish their workload. There are drug users as well, some of whom push themselves into over dosing at times. Slaanesh is a god you don’t see coming because he is in the most mundane of activities we take for granted as being human.

I write all this because it’s what I gathered from reading Fulgrim by Graham McNeill. It’s a perspective changer. My rantings above were not a digression from the review. They are the point. McNeill takes the reader on a wild ride that blows several stereotypes and misconceptions out of the water. And the story that unfolds from the pages is disturbing and sobering enough that even non-Warhammer 40k fans will find something of value here, as McNeill succeeds in making the line between fan and casual book reader thinner than ever before.