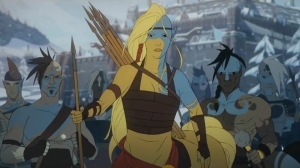 My need to finish this novel exploded this weekend due to a certain announcement. Truth be told, I had been slowly tinkering my way at a 1,000 words a day on the ninth chapter when news source began to report on it. The result has been a kind of personal kick in the arse.

And by late Sunday night, the total word count in the last five days stands at 12,840 words that make up three chapters. Chapters are roughly 2.5k to 4k in length apiece. I try to keep it even, but I think it’s more important to end on a high note that keeps the pages turning.

With the previous quarter of the book done and two chapters on top of that, I’m at 50% complete.

I want, almost need, to get this novel finished by early January. I have to start clearing the writing schedule since my projects are expanding in not only value but importance and time considerations. A pitch window is coming up for another book I have in mind, whom both my other writing friends and my beta readers think is very promising.

Which… brings me to another issue.

It has been a very, very, long time since the Black Library has been open to story submissions. But as of today and until just after Christmas,they are accepting pitches. The timing is quite disruptive to my schedule. Yet I feel some tug to try, given my garnered experience and publications over the last three years.

Unless the Black Library’s next submission window happens to be themed around another short story I have in the pipe (in which case, why not send it?), this could very well be the last year I ever submit to them. Oh, I’ve got ideas a plenty and I would love to spin a yarn about Space Marines. But there is just so much going on, so many other projects which are beginning to see fruition. It’s getting harder and harder to justify hours spent in the pursuit of developing Warhammer 40,000 fiction.

Tonight, I may chug coffee and attempt a double chapter. And figure out who will get my efforts later.