“The game is an intriguing study in the struggle between altruism, selfishness and self-interest.” 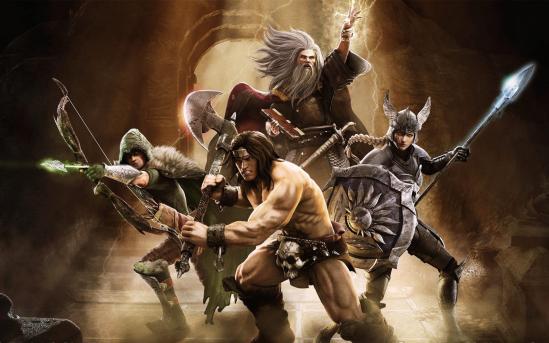 From the get go, Gauntlet spawns nostalgia of my youth. My brother and I played Gauntlet on the NES in the 90s, a game of some mindless fun, in which he and I experimented to see how far we could get in the game with various combinations of characters.

Back in the day, the concept was pretty simple… one or two players pick a class that balances speed, damage and health, and tries to descend into the dungeon. Your health was actually a timer. Take a hit, you lose some time. Eat some easily destructible food and you regain time/health. Monster generators spawn endless foes, which you held back with thrown weapons. On occasion, Death himself showed up, forcing us to race to the exit. Of the four classes available, the Warrior had the most health and damage, the Elf moved the quickest and the Wizard and Valkyrie balanced both.

Since those days, Gauntlet has undergone a few reboots, such as the goofy Gauntlet: Dark Legacy and the grittier Gauntlet: Seven Sorrows. Now, Arrowhead tries its hand at the Gauntlet franchise.

And truth be told, they’ve outdone everyone else.

While the timer has since been removed, the overall appeal of the game remains a hack-and-slash fest for four people, including any combination of couch and internet players. This is awesome as I relish any chance to hang with friends, near and far. However, there have been some significant changes to how each of the four classes works. No longer do they each spam throwing weapons endlessly. Rather, each class fights according to their fantasy archetype. This is what makes the new Gauntlet so much fun.

The Warrior Thor, as you can imagine, is a melee murder machine, capable of going toe-to-toe with hordes of monsters using a wide reaching, area of effect slash that deals impressive damage. He also packs a charge attack that can knock back several monsters, and a leap attack that deals tremendous injury to a single target, great for taking out those enemy generators. His primary weakness is the lack of a ranged weapon. Thus, he can’t pull back and snipe when his health is low. On the plus side, his cyclone attack makes him invulnerable for a moment, a trick I’ve used to cheat death (and Death) more than once. 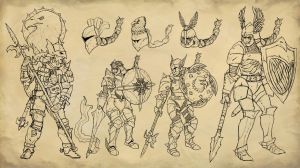 The Valkyrie Thyra is a sword, spear and shield wielding powerhouse, capable of everything. Her spear-dash ability can be executed swiftly and damages several foes. She can take on the hordes with her overwhelming sword strikes. Her shield can deflect projectiles and force foes back, as well as be used as a projectile itself, killing several enemies Captain America style. The Valkyrie strikes me as a great choice for both beginners and advanced players, as her jack-of-all-trades abilities give starting players a sample of the kind of gameplay they like, while skilled adventurers can blend all these skills together into an unstoppable whirlwind of death, flowing from one tactic to the next.

The Wizard Merlin seems to be the game’s most controversial figure. Early in the game’s release, people avoided the Wizard like the plague because of the difficulty in switching between nine different spells, each with their own utilities. As I’ve discovered both personally and in teams however, Merlin may just be the most powerful character of all, if a player takes the time to learn all the spell combinations. His ability to switch from a few potent damaging spells to area of effect, teleportation, and area denial abilities makes him rewarding if one bothers to study him. In a way, I kind of feel like this is how a magic using character should be.

At last, the Elf Questor maintains all the speed and guile of his former incarnations. He can lay powerful bombs which can help clear out the enemy generators, and unleash rapid-fire arrows at the hordes to manage the masses. Interestingly, Questor’s arrow barrage bounces harmless off enemy generators. Thus, he must rely on either his bombs or his charged up, sniping shots to destroy them. His speed is further accented by a roll maneuver, allowing him to escape being cornered and snatch food and gold with haste.

The characters aren’t just flat, silent protagonists either. They compliment each other when they fight well, chide each other when someone destroys a meal, and remind teammates when they’re dying and need to feed. While this is functionally useful, the chemistry between them is light. There’s room for some rib-poking.

Perhaps the thing that vexes me most about Gauntlet is the competition within the cooperation. Players cannot directly harm one another. But they can really step on each others toes if they so choose. Dying results in a portion of one’s gold being dropped for other players to snatch up. Food and potions can be destroyed, and thoughtless teammates have gobbled up all the turkey when others and myself had only a smidgen of health left. Some puzzles call for explosives (Yay!), which is all fun and games until your colleagues decide to light the powder keg you’re carrying (Boo!).

And all the while, you wonder if this is deliberate and intentional sabotage to get your gold, or if they’re just being ignorant boors. However, higher difficulty settings require communal lives, thus greatly discouraging this jerk behavior. The game is an intriguing study in the struggle between altruism, selfishness and self-interest.

So what good is this gold you race to collect from your teammates? Well, there are two major uses. The first is the purchase and improvement of relics, special ability-granting tools you can use once you obtain potions. Gold can also be used to unlock new outfits for your characters. I suspect that Arrowhead will be racing to come out with new content in the future, as what little they have in the store will soon be purchased. There’s just not a lot of rewards available right now.

Speaking of persistence, Gauntlet tackles a different kind of leveling system. Instead of flat experience, as you might expect from a game of the fantasy genre, character improvements are handled through an achievement-based mastery system. Kill a 1,000 mummies, and you’ll gain 10% additional damage against them permanently. Smash a few hundred props and the gold you gain will slightly increase over time. Even people who aren’t doing well gain bonuses from dying, thus reducing the sting of losing.

Gauntlet isn’t the second coming of Diablo II. But at only $20, Gauntlet is fun for four, a party game needing only beer, three friends and a dog. And I do hope that Arrowhead keeps improving on it.

One response to “Gauntlet”