The game frequently hits you with challenging moral choices so gray, you’ll forget what defines good . . . No matter what you do, you will feel a bit jaded after. 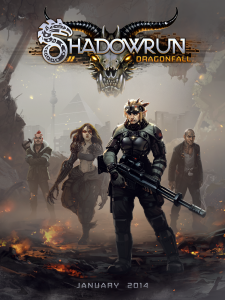 How often is it said that a video game is “important”?

Entertaining, incredible, fun. Sure, we say that all the time. But important? Almost never.

So if you were told about a franchise universe that involves elves, orcs, cyberpunk, modernism, corporatism, shamanic mysticism and nature spirits, urban culture, grimdarkness (think Warhammer 40k), racial tensions, poverty, gang life and more, the very first question on your mind would be, “How could that be anything except a total steaming mess of science fantasy crap?”

The very last thing you’d expect is something so well written, it actually challenges the classics of today.

Shadowrun: Dragonfall approaches disturbing and harrowing adult themes and philosophies in an incredibly thoughtful way, without tiring melodrama or clichés.

Set in Berlin, the main character (your avatar) joins an old friend named Monika who runs both a clique and looks after an entire neighborhood. The game begins with a sordid data heist that swiftly goes wrong, putting both you and the team in the cross hairs of a shadowy and well funded organization. There’s no choice but to go on the offense and find out who they are and stop them before they stop you.

The main character (who you design from scratch) has a past, though you choose certain elements of it. Your race and your job both weigh heavy factors in dialogue options. Your first instinct might be to go as a human, but there are interesting interactions and results to be partaken if you choose one of the metaraces, like Orc or Dwarf.

Even better, you’re given a team of four individuals with their own back stories. There’s Dietrich, a former punk rocker with strong anti-racist attitudes, who felt the call of shamanism. Blitz, a smart mouth decker (futuristic hacker) with lingering problems of his own, mostly romantic. Glory, a chrome (cyborg) combat medic with one hell of a history that I refuse to risk spoiling. And Eiger, a troll woman hung up on military protocol after her career in the special forces came to an end.

If it were up to me, Glory here would earn a nomination for best character design of the year.

Besides the depth each of these four characters brings, I really appreciate that Harebrained Schemes only used half a formula for getting to know them. Between missions, you just talk to them, branching out into multiple paths that you can influence. As I played the kinder, understanding leader in the first go around, playing an uncaring ass in the second game is harder.

But sometimes during missions, you get to learn more about them too. It’s interesting to see the conflicts in the team arise from the choices you have to make. Dietrich had a particularly interesting story about a familial relation who happened to have been caught up in the Humanis Policlub, a hate group who advocates a human race “purified” of metahumans. And guess what? Never once did they use the four letter N-word.

That’s another point. The game frequently hits you with challenging moral choices so gray, you’ll forget what defines good. You can forget the Mass Effect “make everyone happy” approach because it doesn’t exist here. You’ll be forced to make decisions you don’t like, and you’ll discover that the seemingly “good” decisions you make have hard unforeseen consequences that aren’t as simple as being stabbed in the back. You’ll rarely see it coming.

No matter what you do, you will feel a bit jaded after.

Party elf: There’s a party in his body and every drug is invited.

Fighting takes place on a grid board. Each character gets a certain number of action points to either move, fight, use items or cast spells. If you hold a defensive position for example, you can actually shoot twice in a round.

And the area isn’t just flat either. There are bottlenecks through doorways and hallways to take advantage of. Sometimes, there are static defenses like turrets, sources of cover with varying strength to reduce the chance of being hit, and terminals that can be hacked to give you an advantage. The setting is quite interactive.

One of the coolest features about the Shadowrun Returns series is the capacity to have two separate yet connected fights going on at the same time: One in the real “meat” world, and one online called the Matrix. Certain missions revolve around your street samurai and magicians protecting a decker as he/she breaks into the building’s sub-net.

Fighting in the Matrix has its own quirks, from summoning special program allies, taking on guard protocols and trying to beat the “heat”— a clock countdown that will summon defenses both online and off. The whole effect has a Return of the Jedi Battle of Endor feel to it, where one fight effects and is even dependent upon the other. Often, mutually.

While I want to brag about Dragonfall‘s fair price of only $15, the problem is that the game is technically a DLC, meaning you have to get the original Shadowrun Returns with the slightly less amazing campaign “Deadman’s Switch.” Maybe in the future, Harebrained Schemes will figure out how to branch off and release the game as an independent, standalone product with the Shadowrun Core libraries.

However, I can attest that overall, Dragonfall is an amazing RPG experience. It’s fun and rewarding, with an inspired story and campaign design that keeps things interesting. Unlike Mass Effect where we were given good vs bad choices until the end, Shadowrun Returns: Dragonfall forces the player to really make hard, regrettable decisions that prompt great self reflection. It’s something you likely won’t see in AAA titles.

I already can’t wait to see what Harebrained Schemes cooks up next.

One response to “Shadowrun: Dragonfall”