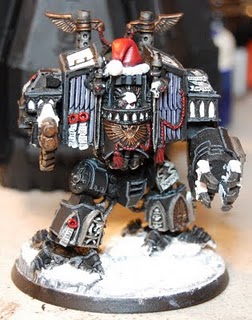 What he did to your chimney is the least of your concerns, because I don't think he's bringing you coal. Anyway, click for more.

So the reviews and scores are in. Congratulations to first place winner, MalkyDel! Second place goes to Raziel4707. You can read the holiday stories, but here are the reviews.

Untitled by Mauthos
He got caught up painting pictures. These scenes of description were both beautiful yet run-on. Chunky paragraphs were made from one sentence and a lot of commas. There’s no shame in breaking up sentences and descriptions a bit and pacing them out.

Despite their length, I loved the descriptions at the beginning. The festiveness and celebratory nature of the holiday was some of what I was looking for. But towards the middle, it began to become a touch tedious. Drinking, eating, debauchery, we’ve already covered that.

Part of me was looking for some kind of holiday tradition outside the norm, like gift giving, or beating a goblin-shaped pinata or just some event that set it aside as a holiday. We dress in costumes and give candy on Halloween. On Easter, we scavenge for hidden eggs. Christmas and birthdays get gifts. You get the idea.

I think there was a good idea here that wasn’t executed well, and if I were to redo it, I would have written the tale from the point of view of the lizard men and cover the ritualism and traditions of the Winter Solstice Human Hunt. Otherwise, except for the whooping at the end, why is this any different than what the lizard men do the rest of the year?

Coburnacht by Raziel4707
The thing I love about this story is that it reminds us that there is a legitimate history to holidays. We are so quick to dismiss many holidays as “inventions of consumerism” and never acknowledging that there is a legitimate, historical reason that day is observed. We frequently honor these traditions without ever knowing why! Raziel also got points for inventiveness and not forgetting holiday traditions as the gift giving and other activities.

I must admire Raziel’s clever use of the historical retelling as a means to keep the story within a Warhammer 40k context: War. It’s a shame that the story was told like a Wikipedia article instead of a tale through the vox of Rasmusson like many of J.R.R. Tolkien’s Lord of the Rings (although a story told entirely in Dreadnaught-speech caps would… annoy, to say the least). But the tale is generally solid if Wikipedia-ish, making it a touch dry.

Grandfather’s Day by MalkyDel
I think this is our winner. A cool idea, a well told story. A sense of tradition, a touch of history and reasoning. Above all, I like that it takes place from a completely different, weird point of view.

The most interesting comments about this piece didn’t come from me, but from our mystery judge, a non-Boltholer named Jacob, who enjoys fantasy and frequently DMs his own gaming sessions. Jacob mentioned that he hates horror, but was pretty fascinated by the bizarre nature of the tale. He was very taken in with it. So well done, MalkyDel. You may have won over a horror hater.

Congratulations folks! Look forward to the next competition after the Black Library submission window!