I’ve never been a huge fan of calling them Space Marines.

When I call them Space Marines, I sometimes think of the various other kinds of space marines out there, from the movie Aliens or Starcraft. Ordinary humans with lots of equipment and training and scars. Tough, meaty guys with the HOO-RAH attitude who frequently get massacred. 40k Space Marines are just something else entirely.

I prefer the term Adeptus Astartes. 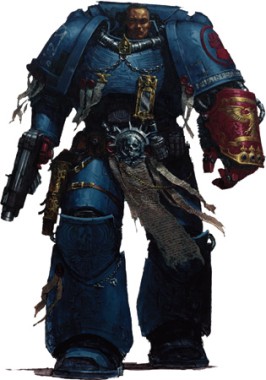 Astartes are a much more awesome term having originated from the goddess of war, fertility and sexuality, Astarte. Which is meaningful for the first two points and ironic on the third. They are masters of war, create new Space Marines through their gene seed and are pretty much asexual.

That last point may have been meant to kick Sigmund Freud to the curb. It’s not that the writers of the Black Library’s stories are afraid of sex; it has occasionally found a place in the stories like those of Ciaphas Cain and parts of the Horus Heresy. But sex is just not a motivation for a Space Marine.

My history teacher back in high school, an amazing man some claimed to be crazy, once told us that the four most powerful motivators of people. My mind added a fifth, and I can’t remember which were the original four he mentioned. But they are power, sex, violence, fear and money.

We’ve already struck out sex. Money doesn’t matter either. It’s possible that power motivates Space Marines to an extent, but they rarely occupy the planets they take for long, rarely seem to ‘move in’ and hold onto a planet for longer than they have too. Fear is taken away by the Imperial decree, “And they shall know no fear.”

So I suppose that leaves violence and violence alone.

They are, after all, warriors. Men who have done away with the usual limitations of mankind, such as age, the need to procreate. They survive conditions that would kill most men, can eat, drink and breath things we cannot. They do not know fear.

They aren’t human, not anymore anyway. So much is taken away that what is left is magnified. You could claim that the big guns and armor and compensating for something with a wink and nudge, and you’d be right. They are compensating for the fact they’re only vaguely human.

They have, on my levels, outgrown what it means to be mortal. And have ventured, but do not cross, into the realm of the immortal. You can talk about all the neat toys like the bolters and power armor. You can discuss the great genetic gifts they’ve received. But repeatedly, we are told that what separates a Space Marine from a man is that they are an idea of humanity transcended, that their faith is their shield and hatred their weapon.

Transcendence. Think about that for a moment.

A major theme of science fiction, fantasy and everything in between is what it means to not be human. To either rise above human or to never have been at all. To be either an alien species or something distantly related to humanity, turned down a different evolutionary path (of which someone is quick to declare another besides humanity the superior race), or technologically advanced. In real life, transcendence is a major issue in most religions, as each attempts to answer the question of what happens to our conscience when we die.

Astartes are ultimate in the fact that they touch on so many of these things, all at once. There is the genetic manipulation of their DNA through the introduction of gene-seed organs. There are technological augmentations, such as the ports of the black carapace, augmented limbs and the power armor. And yes, there is even a fervent religious element to it as well, as they become the Emperor’s ‘Angels of Death.’

It’s a curious thing then that they reject the cult of the Emperor as a god, with the view that he was an extraordinary man. Yet, so much of their day is spent in prayer and ritual. The original material on this was taken down from the GW site, but remains available. Even stripped of a central monotheistic figure, Astartes remain diligent in their observation of chapter tradition.

When you strip a man of his manhood and replace it with the gifts of a demi-god, there is only a fraction of his humanity that is left over. And what’s left becomes intense and quintessential. It turns him into something more pure. The difference between a human and an Astartes is akin to that of men and angels; when surrounded, as they often are in the 40k universe, a man may have no where to go. He may have no choice but to die. But an angel can rise.

Or… as I’ll discuss later, an angel can fall.