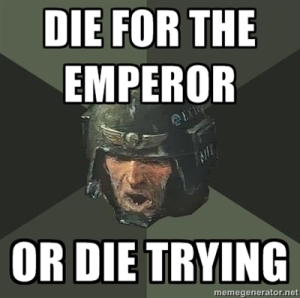 Well at least you succeeded at SOMETHING in your miserable life!

So I received another rejection letter, although this one was from Every Day Fiction.

To my surprise however, they gave the story I submitted three full reviews by three editors. The reviews were extensive enough for a 700 word flash fiction story involving a game at the office.

The reviews arrived at relatively similar conclusions. They all seemed to enjoy the beginning, the overall idea and the humor. But at least two out of three editors took issue with the overall reaction of this one character against the setting. As I read their reactions, I came to realize that the rejection letter is far, far more valuable than the story itself.

You see, a story that is successfully published is like a hypothesis confirmed. It’s ideal, but doesn’t really teach anything or lead to any new discovery, like a writer’s weaknesses. Many publishers do not bother with full reviews like this one, which often leaves large numbers of befuddled and anxious writers.

As I read the review, I understood what they were getting at. The idea itself is gold, but the execution needs work. Based on what I gathered, I suspect that my third story, a spiritual/religious pagan piece, will probably be rejected on grounds of being confusion. However, the second story about a guy on a date probably still has a chance to succeed.

For now, I’ll put this one on the back burner and try to re-cultivate the idea into something that better fits the setting. It shouldn’t take long, but once finished it’ll have to be resubmitted and go through another two and a half months of occupying the slush pile.

On the flip side, the internet meme above relates to a victory I took from a friend in a game of table top Warhammer 40k, using only 17 words. How, you ask? Well, to understand you’ll have to read the following dialogue.

He2etic: “And someday soon, I will kill you all at the BLL and Gamesday with my Black Legionnaires.”

Shadowhawk:  “I don’t have any army anymore so that might be a bit difficult. :D”

Chaos. We take victory anyway we can.

2 responses to “Rejection and Victory”