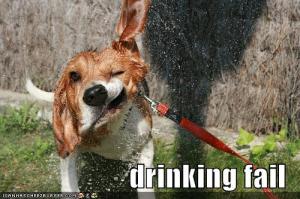 Between you and me? That wasn't the dog drinking. He actually belched.

The following is a heavily edited version of the previous blog entry. The entire first half was removed to prevent any embarrassment to mentioned parties. Even though names were not given, I decided to venture on the side of extra caution.

I’ve been thrown out of a bar before (I’ll tell this story in a minute) and the first time is never easy or fun. But it’s not a big deal. You can usually come back as early as next week and they won’t remember. And if they do recollect your face, they wouldn’t care beyond keeping an eye on you.

Yeah, they’ll kick you out for the night if you break their rules but they have to make money to survive as a business, so it’s not like they won’t forgive you. The only thing that would probably get you permanently banned (and likely arrested) is violence. The last thing any bar needs is for a few rowdy dudes to transform their establishment into a real life version of Road House.

Come to think of it, how the hell did that bar in Road House stay in business? If people show up for a drink and good times and instead they end up in the hospital, any sane person would probably not be inclined to return. Unless they’re getting these kind of reviews on Yelp:

I went to the Double Deuce for a beer after work in order to relax. As soon as I got there, some dude smashed a chair into my neck. I woke up with 12 stitches and a new steel plate in my head. Amazing happy hour, will be back next week! Four out of five stars!

Anyway, I got kicked out of a bar once for not having some happy hour ribbon on my wrist. This ribbon had nothing to do with legal age, it just confirms that you’ve given the proper name (read: password) at the door so you can drink slightly cheaper drinks upstairs. Of course, bartenders check for these ribbons before serving you upstairs. But  no one ever knows the person, we just pass the name along to other people. Even strangers who ask usually get it. But that night, my buddies Fernando and Paul didn’t feel like waiting in line, so we entered normally and walked upstairs.

Now the bouncer grabbed Fernando’s wrist but he stormed through. We followed and were left alone. I went down stairs to use the restroom without thinking about what might happen. And when I tried to go back up, I got wrestled to the ground for refusing to give into the bouncer’s request to stop, and was tossed out.

The manager did not take this well. He asked me before I was tossed out who grabbed first and I told him the bouncer did. After I was removed, the bouncer was reassigned to the rear door so he caused no more trouble. You see, what they did is technically illegal in this state: The bouncers can only physically react to someone if that person proves himself violent and dangerous. In any other case, the bouncers can only physically block a person (as in stand in their way) and then call the police to request that person’s removal. 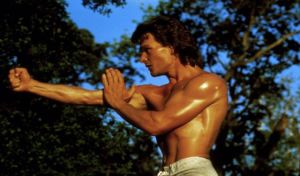 He's attractive, built like a Greek statue and is a lawsuit liability. What more do you want?

I didn’t instigate anything, and the bartenders could have simply refused to serve me or charged me regular price. A friend of mine was kicked out for no other reason then the fact that she was at the bottom of the stairs when one of her friends drunkenly tripped and fell on her. They were removed.

Yeah, these stories aren’t really proof of anything. It’s all hearsay, but it’s a problem I feel inclined to say something about.

And I do get that bouncers and floor men don’t have it easy. Sometimes they have to make what looks like a simple decision on paper when there’s a lot of pressure on the spot. I have a friend who is a bouncer of a strip club and he comes home and vents on Facebook about the fools he wants to stomp. Being a professional, he obviously doesn’t do this. But for every professional like him, there are plenty of under trained or unqualified types who inflict more harm than good with actions that can endanger patrons and hurt business.

The worst case I’ve ever seen of a man being kicked out occurred at a Mexican restaurant. A pair of french men were bad mouthing the country and a war veteran (who required a cane to walk) gave them some serious tough talk for their views. Nothing violent occurred and they were pretty nasty words. But the owner came over and grabbed the man, forcing him out of the restaurant. He was not asked to leave, he was simply tossed out.

Yeah, if I were a manager I wouldn’t stand for that kind of pre-fight talk in my establishment. But there’s an order of which you go about things to remove a drunk patron, and a damn good reason you don’t skip steps on it. Did this veteran break a restaurant rule of conduct? Absolutely. But breaking a restaurant’s rule is not necessarily the same as causing a crime. So I had no sympathy for the owner when the veteran called the police on him. Because if anything, it is the owner who maybe guilty of assault.

Check out Crime Doctor to catch my drift on this.