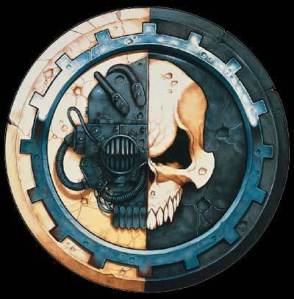 Confessions of a real life Tech Priest, who is too cowardly to give up his limbs for the Omnissiah.

So I want to take a minute to talk about the job situation across the nation. I don’t want to, and therefore won’t, dive into politics on the matter. But a lot of folks are less fortunate than me and are finding themselves either unemployed, under employed or doing jobs they dislike just to make ends meet.

I’m fortunate because since I was young, I had an affinity for technology. My dad nurtured that aspect in me and encouraged me to continue with it throughout high school.

In college, I knew my major was going to be Computer Science the moment I arrived. But I held back on declaring because I had to choose between two disciplines of Computer Science: the systems track (focus on programming, networking and hardware) or the artificial intelligence track (which involved more esoteric programming and some psychology courses). After sampling both choices, I went systems because of less theory and more market applicable skills.

Life after college wasn’t a cake walk. I found out the hard way that a degree didn’t entitle me to a job. I ended up working at a Starbucks to pay the bills while I searched for something in the field. It was hard. I kind of goofed off in college and didn’t search for a position before I received my bachelors.

That was five years ago, and it took a couple of false starts and lots of trial and error to begin my career. Today, a few of my friends ask questions and look to me for advice on how to get hired. These friends also want to join the IT field. So here’s a little insider advice for anyone trying to score a position in the IT field.

So that’s what I got for anyone struggling out there to get a job in this climate. Fact is, don’t give up just because the prospects suck. There is always money to be made out there, always someone in need of someone to do something. And if anyone whines and nay says your efforts, stop talking to them. You don’t need someone dragging you down.

Keep calm and carry on.

2 responses to “Confessions of a Tech Priest”