On June 19th, 2008, Valve Software updated the Pyro class in Team Fortress 2. The change gave the Pyro access to a new ability, called the compression blast. Fast forward to 2011, when Team Fortress 2 becomes free for all to play. And you have a number of guys who are learning from scratch the nuances of the Pyro class.

By pressing alt-fire while wielding the flamethrower, a burst of air is unleashed which allows the Pyro to deflect certain projectiles and force opponents back. This ability gives Pyro some unusual skills that no other class really possesses. This guide is meant to show players how they can use the compression blast to their benefit. There are three major aspects to the compression blast: One, it can deflect certain projectiles. Two, it can force the enemy back and away. Three, it can put out immolated teammates.

Before we begin, let us go over some equipment. The Pyro has access to three varieties of the flame throwers. Both the Flamethrower and the Degreaser use 20 ammunition per blast, giving you a decent 10 bursts without horribly eating up your ammo supply. The Back Burner however uses a staggering 50 ammo per blast, limiting you to 4 compression blasts. Given that you will probably also want some of that ammo to ignite your opponents, you will probably want to use the latter two weapons until you are experienced enough to trust yourself to the Back Burner’s limitation.

Here’s a movie demonstration to get you started.

So let’s break it down some.

The Sandman ball, the Flare Gun‘s flare, the Huntsman‘s arrows, the Demoman‘s grenades or sticky bombs and especially the Soldier‘s rockets and Cow Mangler 5000 blasts. The Level 3 Sentry‘s missiles, Mad Milk, Jarate and Crusder’s Crossbow bolts. All these can be returned with interest, as using the compression blast gives the projectile a mini-crit boost if it is not already a critical hit. Of the classes who have any weakness to the compression blast, you will be using it mostly against the Demoman and Soldier. Deflections require some practice and skill.

When fighting Demoman, there is a critical exception to how compression blast works. Except for sticky bombs, all projectiles change ownership and become the “firing property” of the Pyro who deflected them. Sticky bombs do not change ownership (although you will get kill credit) and the Demoman who fired them can still ignite them (and will harm or kill you if you are in the blast radius). However, the sticky bombs are blown back and away by the compression blast, allowing the Pyro to clear a mine field.

Another critical tactic to use against the Demoman is to “claim ownership” of his grenades in order to prevent them from hurting both you and your team mates. While it’s best to compression blast the grenade mid air to send it back, using the blast while the grenade is on the ground will render it harmless.

The Soldier is straight forward as he will be firing rockets at you, likely just outside your weapon’s range. You will have to develop a sense of distance and timing in order to return the rockets. When frustrated by a defensive Pyro, some Soldiers will switch to their shotgun to handle you if rockets don’t seem to work. Others will stubbornly cling to their Rocket Launcher and try to shoot for the walls or floors around you to catch you in the secondary blast radius.

Bear in mind two things. First, the closer you get to the Soldier, the less reaction time you will have to blast a rocket back, making it more difficult to pull off. And second, that the angle that you compression blast the rocket will also change its flight path, meaning that blasting it from an angle will deflect it by that angle while blasting it dead on will deflect it 180 degrees the opposite direction. Use this against the Soldier whenever possible.

Normally, a Pyro player loves to watch the people around him burn. However, an exception should probably be made for his allies. The compression blast can be used to extinguish after burn on an ally. Do so whenever possible to save your team mates’ lives. You may have to remind yourself that you can do this.

The last and most thought provoking aspect of compression blast is its ability to knock back opponents against their will. Normally a Pyro, who works so hard to get up close to the enemy in the first place, wouldn’t want to push his enemies back and out of his flame thrower’s range. But there are times when doing so is worth increasing the distance between the Pyro and his (or her, maybe)  opponents. This section deserves a long talk to explain the details and I’m going to break it down by sections.

Well it certainly burns when it goes down...

One of the most useful aspects of this ability is that it can be used to break an ÜberCharge circuit. The most common ÜberCharge set up is with a Heavy, allowing him to advance and firing a spun up Minigun at your team. By pushing either the Heavy or the ÜberCharging Medic out of range, the Heavy will become vulnerable again.

With that being said, think carefully.

It is very possible for a Pyro to compression blast a Heavy forward, pushing him towards the Pyro’s own team. While on the plus side this might take away the invulnerability, it could advance the spun up Heavy within the best killing range of his weapon. If you take a look at the Minigun’s stats, you may notice that at point blank it can deal 500 to 540 points of damage a second. The closer to a revved up Minigun’s firing arc you are, the less likely you are to survive. If you blast a Heavy forward and he kills you half your team in the process, it wasn’t worth it. The same is true of an enemy ÜberCharged Pyro.

To prevent this mistake, you ideally will want to focus on either pushing the Medic back, or pushing the Heavy or enemy Pyro back laterally from the direction of your team, but still out of the range of the Medi Gun. An ÜberCharged Medic is invulnerable but far less a threat than the person he was charging.

One of the most dastardly aspects of the compression blast is the ability to force an enemy player into places they don’t want to go. Like lethal pits or the nasty twin buzz saws of the Sawmill map. Forcing your opponent down a cliff can save you health and be quicker than going toe to toe with an opponent.

Another less direct use is to corner opponents. Pushing an opponent into a corner to prevent escape and then switching to the highly lethal Fire Axe to finish them is a solid tactic. You can also use it to prevent opponents from getting a nearby med kit if you’re quick enough. Finally, don’t be afraid to toss enemies in the air to juggle them. Huntsman equipped Snipers cannot fire their bow in the air. I’ve yet to try it, but this tactic may give that needed edge against an enemy Pyro, letting you juggle them in the air and cooking them while being airborne ruins their aim. 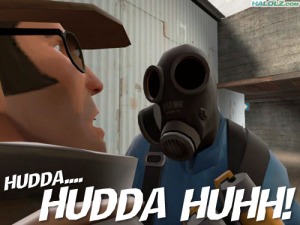 Most people don't know it, but the Pyro is the game's best trash talker.

Defensively, the compression blast can be critical at times for halting enemy progress. Use it to blast the enemy away from Control Points or in King of the Hill. In Payload, pushing the enemy away from the Cart is very useful, since the Cart slowly heals nearby enemies over time. Keeping them away from a healing source is vital.

Offensively, pushing away the enemy from objectives prevents them from blocking you, allowing you to claim the objective or push the cart. Clearing out a sticky bomb mine field around the objective is a common past time.

In conclusion, with a little practice you may discover that there is a lot more depth to playing the Pyro than people may first believe. Have fun!

…And burn them all.